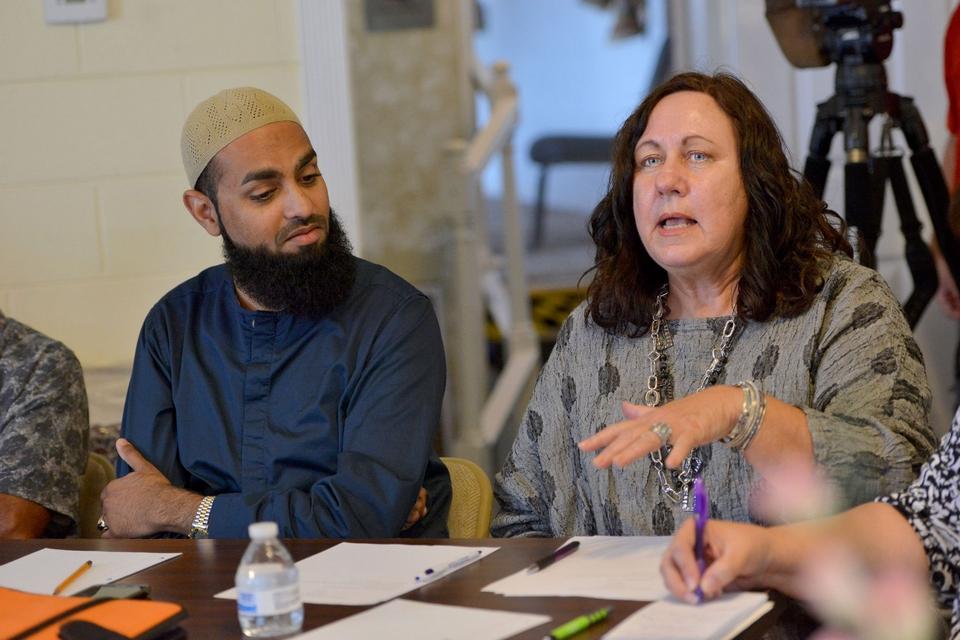 Sandy Conn Arnold had an epiphany earlier this year about how to help bring healing to the country, starting in Lake County, by way of an interfaith organization.

It came after she witnessed prejudice against Muslims after the Unity Church of Leesburg — the church she belongs to — sold their building to a local mosque, The Islamic Center of Lake County.

Then came the Pulse nightclub shooting in Orlando.

After that, Arnold and about 25 religious leaders from around Lake County came together to create Interfaith Lake County, a group designed to help the community through difficult times by showing how all religions can work together.

Since its first meeting on June 27, the group has hit the ground running — and Arnold said it is just beginning.

“I have been involved in non-profits and community organizing all of my life, and never have I been involved in anything that’s been this easy and effortless,” said Arnold. “That tells me this is the time for this message, that we need peace.”

At their initial meeting, leaders identified three areas to work on — educating the community on how all religions can work together, being a resource in times of crisis and staying visible in the community as a show of unity and strength.

At that meeting on June 27, the group also created an organizing committee to determine projects that fulfill the goals and formulate an organizing document.

“The United States is a nation of great diversity,” the group’s philosophy statement reads. “Our population represents nearly every region and religion of the world. Such differences can erect barriers, stir up prejudice, and create social tension; but, such differences can also endear and enrich. Interfaith Lake County seeks to harness the positive potential.”

At a second meeting on August 1, the organization decided that Interfaith Lake County would stand on its own rather than merging with the Interfaith Council of Central Florida.

“The culture and community in Orange County is a little bit different than that of Lake County’s so we would need to approach things differently,” said Arnold. “We figured that as sister organizations, we would be able to accomplish much more.”

She said the committee will meet once more and set a time for the entire interfaith group to come together. At that time, project ideas will be presented.

Arnold said she is looking forward to what Interfaith Lake County will accomplish and is excited at what has already been done.

“In a short period, we’ve developed a really strong core group that show up to every event that has come up since we formed,” she said.

Interfaith members have attended the American Muslims for Peace march in Orlando, an Interfaith Peace Partners “Prayers for Peace” service in Oxford and a Black Lives Matter peaceful protest in Tavares. At the Tavares event, Imam Azhar Subedar, the spiritual representative for the Leesburg Mosque and founder of Purposeful Life, a not-for-profit, Tampa-based organization, spoke about peace and unity.

Subedar said he hopes to see Interfaith Lake County give a human face to all humans regardless of who they are and what they believe in.

“Our strength and success is within our diversity and the acceptance of one another,” Subedar said.

Arnold said the next order of business for Interfaith Lake County will be replicating a Prayers for Peace service. She said the ones held in Sumter County have attracted hundreds and are growing.

“We think we can do that in Leesburg too so we are looking at big enough church venues,” Arnold said.

Other projects on the horizon for Interfaith Lake County include publicly denouncing inflammatory, divisive and untrue rhetoric about any religion, creating a youth program for high school students and partnering with American Muslims for Peace to create a “Not in My Name” rally in Lake County to spread the word that Islam is not a terrorist religion.

In light of recent terrorist attacks throughout the world, Habib Shaikh, a board member of the Islamic Center and part of the interfaith group, said the Islam religion stands for peace and unity. He said extremists misrepresent the Muslim faith.

“Our religious book, which is the Quran, teaches us how to live peacefully within and among other people in society. It teaches us peace, unity, togetherness and being helpful to others who are in need.”

Arnold said the group is also working on a partnership with Beacon College and Lake-Sumter State College to bring educational lectures and forums with a panel of clergy of all faiths to students. She said that may help reach younger generations, educate them about social, world and ethical issues and about what roles they can play.

“We need to come together,” Arnold said. “We need to take a stand against all of the violence going on in the world. The more peace, brotherhood and unity we can inspire, the bigger the difference we will be able to make.”